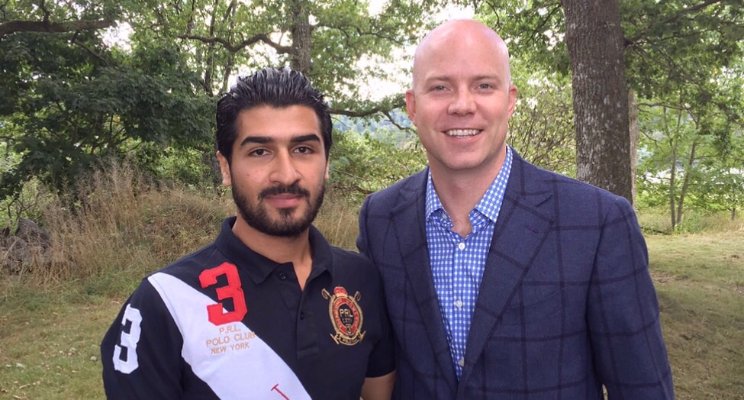 Refugees have been headlining the news in recent months, but an important part of the story is missing: the human story. Behind the statistics are real people, like Anas, a young Syrian man I met whose resilience and spirit continue to inspire me.

Anas stood out to me among the group of recently arrived refugees. I was in a home in the outskirts of Stockholm, meeting with about 30 refugees from around the world. Many were unaccompanied minors, boys and girls who had fled Afghanistan, Syria, Iraq, and other countries, alone. Anas was in his early 20s, and his perma-smile and beaming eyes drew people in.

Anas grew up in a suburb of Damascus, Syria. In 2013, when he was 21, his neighborhood was thrown into the frontlines of the Syrian civil war. With the area under siege, armed men came to his family’s door and told them they had fifteen minutes to abandon their home. Anas and his family walked away with nothing but critical personal documents.

His family found an apartment in central Damascus and tried to rebuild their lives. Anas was able to finish law school, but six months into practicing law, it became clear that he needed to immediately leave Syria. Like all men his age, he would need to fight for one faction or another. His voice cracked with emotion as he explained, “I could not hurt an animal, so I knew I could not hurt a human. I love human. I want to give my life to the human. We are brothers living under the same sky.”

Within a week, Anas and his younger brother fled Damascus, leaving their parents and two sisters behind. Anas had read about Sweden and heard they were accepting refugees. He explained that the natural beauty in Sweden gave him peace: “If a country takes care of their nature, they must also take care of their people.” With only some clothes, dry food and important documents, they set off for Sweden.

Fleeing across the Turkish border was too dangerous for them, so they went to the Lebanese border, but border control refused to allow them to cross. Anas pleaded with them, swearing they would not stay in Lebanon, but just flow through to get to Turkey. He and 39 others spent three days at the border sleeping on the ground, searching for food, and hoping they would be allowed to leave Syria. Ultimately 31 of the group returned to Damascus, but Anas and his brother knew that meant near certain death for them. His last resort was to call his mother, who arrived at the border, and for some reason was able to use her documents to ensure her sons wouldn’t stay in Lebanon. They were allowed to cross the border, but my heart broke as Anas was overcome by emotion discussing his goodbye to a mother he will likely never see again.

In Turkey, they paid smugglers to take them across the Aegean Sea to Greece. Thirty-nine people were crammed onto an inflatable “plastic boat” that was 20- feet long. “We were lucky,” he explained. A Greek fishing boat saw them and showed them the way to shore. As they hit the shore, he was greeted by an individual from the UN who embraced him and told him, “You are safe here.” Anas’ eyes filled with tears as he described the overwhelming feeling of safety and how he couldn’t stop crying on that Greek shoreline.

He and his brother then fled across the Macedonian border and into Serbia. They had to cross the border by foot for seven kilometers, running for safety. During the chaos, he and his brother were separated. Serbia was filled with smugglers and gangs, looking to take advantage of desperate refugees. It was terrifying, and he was alone. With visible emotion he explained, “I just wanted to find my brother. I didn’t feel like a normal human. I was hopeless.” That night he found a refugee camp where he slept alone, full of fear. The next day a friend of a friend somehow ran into his brother in Belgrade, four hours away, and they were connected by phone. When they were reunited, he said, “I forgot all the pain.”

They made their way together to Croatia where he heard the UN would be there to accept refugees. “I just felt safe when I heard the UN would be in Croatia.” Upon arrival, they were offered food, water, and medical attention. They then made their way across the Hungarian border and into Germany. While on a train in Germany, security forces boarded and asked Anas and his brother to leave and enter a refugee camp. They begged to be able to continue their journey but were required to sleep on a floor at a camp with thousands of other desperate refugees. While there, their bags were stolen along with their birth certificates and Anas’ university diploma. The only thing they had left were photo IDs, which hung on a lanyard under Anas’ shirt. It was enough to prove their identities and that they were Syrian, which gave them additional protections.

After being registered in the camp, they were allowed to continue toward Sweden. After nineteen long days of fleeing in fear, they had finally arrived in a new home.

Within weeks he was volunteering for the Red Cross, assisting other newly-arriving refugees. Anas is gifted with languages. He dedicated himself to learning Swedish and within five months was speaking the language semi-fluently. When I met him, it had been ten months since his arrival, and he was still waiting to receive permanent residency documents. He lives in a refugee house and continues to spend his time volunteering with the Red Cross and teaching Swedish to other refugees. “It is my pleasure to volunteer and help others,” concluded Anas.

As members of the human race, we have a responsibility to assist the most vulnerable among us. We need to take action and raise a unified voice to support refugees. After all, aren’t we all brothers living under the same sky?

Davis Smith is the Founder and CEO of Cotopaxi, an outdoor gear and active lifestyle brand with a social mission at its core. He is also a member of the United Nations Foundation’s Global Entrepreneurs Council, a strategic advisory council supporting entrepreneurial solutions to global problems. Anas’ story was shared with his permission with the hope that his voice can change the way the world sees refugees.